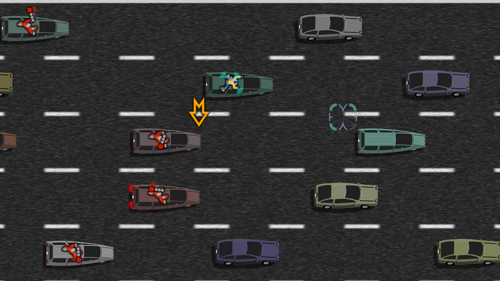 Added a second new car. Finally got rid of that original car, drawn in a few minutes during a game jam with paint.net shape primitives. These new cars are also textured to work best at 1080p, although the actual characters will blur a bit because they're still sized for 720p.

I've also added "landing points" on the cars, to better control where the units cling to. Their positions on the new cars look much better now. This change is also critical to support larger, multiple-landing-point vehicles (coming soon!).

In addition, I zoomed in a bit and brought the game down to six lanes. Hopefully it'll be a bit easier to see what's going on! The long term plan is to have a typical section have four major lanes, a train track at the top, and on-ramps/off-ramps at the bottom.