Zip along the highway on the roofs of passing cars! Jump from car to car! Kick your enemies to the pavement!

Press "M" from the opening dialog to map your specific controller

This is the latest Work-in-Progress version of Cyborg Highway. Feedback is always appreciated! The original mini/jam prototype is here: https://itch.io/game/edit/414403

Swoosh 1 by man on SoundBible.com

The Fog-Of-War change was definitely for the better.

Very fun little game, but there is definitely room for improvement .

Hi, thanks for trying it out and giving feedback! Always appreciated. :) Which particular GUI elements do you think need to be bigger? What sort of screen were you playing on (PC/phone/tablet)?

Ahhh yeah I could definitely make that bigger. It's not really bullets, though. I think I'm running into the limitations of dumping people into gameplay without any tutorial or instructions. It's "capacitance" energy that powers all special abilities (currently just the hammer and shotgun). And the bar is kinda the worst place to look at it, it's also displayed on the character and on the mouse pointer. But nothing in-game tells you any of that... I think perhaps it'll be clearer when players start without any special abilities and buy them over the course of missions, getting a little video of how it works before each purchase.

BTW, a lot of people complained about being distracted by the view-blocking effect, so I've made it a mask/dimming effect. Seems to be better for most people.

Hey, I gave the game a shot, saw it Kickstarter a week ago or so, and glad to see it got updated! I love this game concept! My current highest score is $10000

Here's some stuff to mention

I couldn't actually find any bugs or issues aside from the instability, but that's from HTML5, so I can't put it against your game. Maybe offer a downloadable file too though for those who want to play the game smoothly.

Pretty excited to see where this game goes. It's definitely one of a kind as far as I know!

Hi, thanks for trying it out and leaving feedback! Always appreciated. I'll bet you could get your score up with a little practice. ;)

What sort of instability did you experience? What browser are you using? I'm trying to keep it running well in WebGL/HTML5, but it can be a struggle sometimes. Chrome and Firefox seem to run it better than Edge. So many people prefer to be able to just jump in from their browser that I hadn't given much thought to including downloadables. I'll get a set in later this week.

Oh that's awesome you've already thought about lane merging and all that other stuff. I'm using Chrome, but I may have been running it with heavier programs in the background, so they probably had an impact on performance. But the only instability I encountered was a minor slow down every now and then for a few seconds. Nothing game breaking.

Just thinking about this, by any chance were the slowdowns occurring when a unit got eliminated? If so, that's an intended "cinematic" effect. 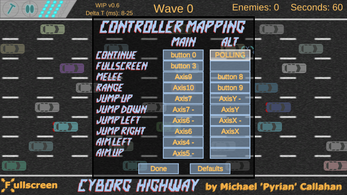 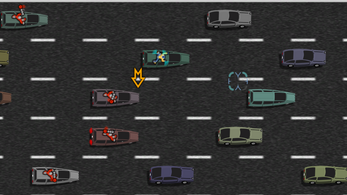