A downloadable game for Windows, macOS, and Linux

This is a demo/prototype of an unfinished (and currently on hold) project. There's 4 levels of tutorial and one (out of eight) procedural provinces playable. It's got a lot of neat ideas/mechanics and I think the final watercolor-based graphics turned out very pretty. Spells, abilities, and items are mostly done. UX needs a lot of love. Story/content obviously needs to be finished.

Combat emphasizes outmaneuvering your opponents; luck and attrition are not as important as they are in most RPG's. Attacks automatically hit, but combatants can automatically block, parry, or dodge incoming attacks a limited number of times per round. Succeed by negating defenses (such as breaking shields to prevent blocking or luring enemies into mud to prevent dodging) or simply piling more attacks on a victim than it can defend against. However, a beleaguered opponent can increase its defense count in lieu of attacking, and enemies are likely to focus their attacks on less defended units, so watch out!

Environment simulation and modification. For example, if you set a fire (by spell or certain weapons), the fire generates smoke and sparks that drift in the ambient wind. Sparks can spread the fire or set new ones, smoke blocks line of sight. You can use spells to direct the wind at your foes, potentially setting them on fire. Once burning, units have a turn or two to get to a water feature before they start taking damage. Fires (terrain and/or unit) can also be extinguished by a variety of ice and water spells. Fires sometimes spontaneously go out, but mostly they burn until their fuel is exhausted, turning grass, bushes, and trees into char and finally ash.

Animus spell system turns the usual concept of mana on its head! Instead of consuming mana to cast spells, each spell that has been cast provides spell-powering Animus of one of five types for the duration of its cooldown. This leads to a constantly evolving "hand" of available spells, as each casting both locks itself and unlocks further magic.

Fixed party of four characters, each with four upgrade paths to choose from as you level up. Find or buy items to further empower your characters, but be careful! Many items have built-in drawbacks as well. Each character's relationship with each other, the world they travel through, and the over-arching narrative, evolves over time based on your choices. 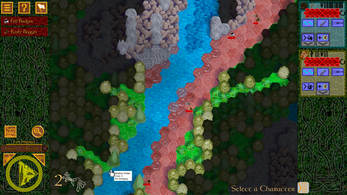 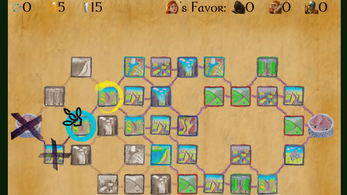 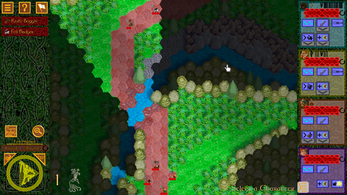 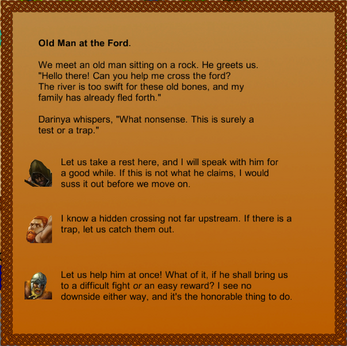